The indigenous people of Argentina, also called native people of Argentina, are the set of Amerindian individuals, communities and people that inhabited the current territory of Argentina at the time of the arrival of Europeans in the sixteenth century, as well as their current descendants and past -mixogenized or not with non-indigenous people- and those of equal conditions in neighboring countries that migrated to the current Argentine territory from that moment.

The definitive data of the Complementary Survey of Indigenous People (ECPI) carried out in 2004-2005 highlights the existence of 35 different groups of indigenous people in Argentina, comprising 600,329 individuals (457,363 who recognize themselves belonging to some aboriginal people plus 142,966 who do not belong but they are descendants in the first generation of a town) equivalent to approximately 1.6% of the total population.
This is without prejudice to the fact that a little more than half of the population has at least one indigenous ancestor, although in most cases the family memory of that belonging has been lost. In the 2010 census, 955,032 people recognized themselves as indigenous or descendants of indigenous people, representing 2.4% of the national population.
The indigenous people that were considered in the census records were:
Central region: tuffs, pilagás, mocovíes, matacos, chulupíes, chorotis and chiriguanos.
Northeast region: Guarani and Cainguas.
Northwest region: Aymara and Quechua.
South central region: tehuelches, araucanos, quenaken, yamanes and onas. 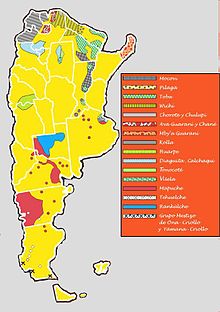