Declared a National Natural Monument by the Argentine authorities, the “Ballena Franca Austral” is also a monument in terms of size: the females measure an average of 16 eters long! Its habitat is found in the waters of the entire southern hemisphere, from the Pacific to the Indian Ocean.
Is the undisputed star of Peninsula Valdes, in the province of Chubut, Argentina. It is one of the rare places in the world where you can observe them closely. From June to December, they are there to reproduce and give birth. Boat trips are made during this period to be able to approach and observe them closely.
These whales are quite curious and playful when they are close to humans. There are cases in which they took small boats and kayakers on their backs.
They also interact amicably with dolphins and humpback whales.
They are slow, their swimming speed is 5 km/h on average.
Newborn whales weigh about 1,500 kg. An adult specimen weighs 47 tons.
It is believed that southern whales live on overage 50 years in the wild, but the information is scarce and there are examples of similar species that live up to 100 years of age.
Interesting facts:
Sometimes they take their caudal fin out of the water and let the wind push them, this behavior is known as “sailing” and it seems that they do it for fun.
Their whitish scabs are calluses. The pattern of these calluses is unique to each individual (like a fingerprint) and that allow scientists the photo identification of them. 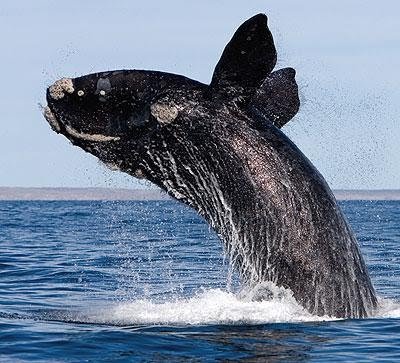